Fender acquired U.S. guitar string manufacturer the V.C. Squier Company in 1965; by 1982 the Squier name had resurfaced as a low-cost "value brand" alternative initially manufactured and distributed in the Japanese domestic market and soon offered to Europe, North America and the rest of the world.

At the time, many other established brands offered affordable copies of classic Fender models including the Stratocaster®, Telecaster®, Precision Bass® and Jazz Bass® guitars. When Squier versions of these instruments appeared, demand for them as the "official" cost-conscious alternatives was immediate, and a brand name was reborn.

To maintain and control costs over the years, Squier instruments have been produced in several nations, including Japan, Korea, India, China, Indonesia and Mexico. While the brand has produced its share of innovative designs over the past 25 years, its main focus and most successful approach has always been to be the "value brand" alternative to its big brother, Fender.

It sure didn't start out that way, though. Let's go back to the very beginning... 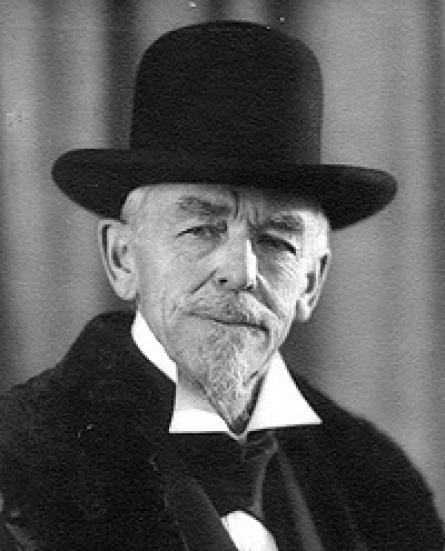 Jerome Bonaparte "J.B." Squier, a young English immigrant who arrived in Battle Creek, Mich., in the latter part of the 19th century, was a farmer and shoemaker who had learned the fine European art of violin making. He moved to Boston in 1881, where he built and repaired violins with his son, Victor Carroll (V.C.) Squier. To this day, their violins are noted for their exceptional varnishes, and they command high prices as fine examples of early U.S. instrument craftsmanship. Indeed, J.B. Squier ranks among the best-known U.S.-trained violin makers and is often referred to as "the American Stradivarius."

Victor returned to Battle Creek, where he opened his own shop in 1890. As his business grew, Squier moved the company to 429 Lake Ave. and eventually to 427 Capitol Ave, S.W.—the famous "fiddle factory" of Battle Creek. With a limited market for violins in Battle Creek, however, Squier astutely sought relationships with national music schools and famous violinists.

Up to 1900, the best violin strings were made in Europe. Victor Squier started making his own hand-wound violin strings, and the business grew so quickly that he and his employees improvised a dramatic production increase by converting a treadle sewing machine into a string winder capable of producing 1,000 uniformly high-quality strings per day. Squier violin, banjo and guitar strings became well known nationwide and were especially popular among students because of their reasonable price.

In the 1930s, Squier began making strings for the era's new electric instruments; the company also sold pianos, radios and phonograph records until divesting itself of all string-related products in 1961.

Fender entered the picture in the 1950s, when the V.C. Squier Company began supplying Southern California inventor and businessman Leo Fender with strings for his unusual new electric guitars. The V.C. Squier Company became an official original equipment manufacturer for Fender in 1963, and Fender bought the V.C. Squier string company in early 1965 shortly before Fender itself was bought by CBS in May of that year. By the mid-1970s, the Squier name was retired as the strings had taken the Fender name. 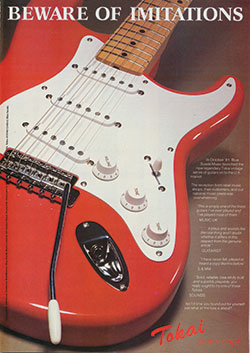 The promise of a new, revitalized Fender dawned in the early 1980s as the dismal CBS era wound down, and concerned Fender officials noted the abundance of Japanese guitar makers who were blatantly copying—in some cases cloning—original vintage Fender designs with great accuracy and low costs, albeit with some occasionally bizarre details.

In one particularly galling instance, for example, one manufacturer used headstock logos closely resembling those of original pre-CBS Fender guitars, but using the words "Tokai" (with a large backward uncrossed "F"), "Springy Sound" instead of "Stratocaster," "Breezy Sound" instead of "Telecaster," "Oldies but Goldies" instead of "Original Contour Body" and —the last straw— "This is the exact replica of the good old Strat" instead of "Fender Musical Instruments" in small print below the main logo. Ouch.

Fender acted by setting up its own official Japanese manufacturing operation, Fender Japan, in March 1982. A joint U.S.-Japanese venture, Fender Japan produced guitars with material and technical support from Fender's U.S. facilities; Japanese manufacturing facilities even included factories that had been producing the aforementioned Fender copies. By May, Fender Japan had six vintage instruments— '57 and '62 Stratocaster models, a '52 Telecaster, '57 and '62 Precision Bass® models and a 62 Jazz Bass®.

Meanwhile, as the flood of Asian Fender copies surged over Europe, Fender sought a competitive low-cost alternative. Accordingly, the long-dormant Squier name was resurrected and assigned to export versions of the new Fender Japan vintage models; these became known as Squier JV ("Japanese Vintage") instruments. These high-quality models featured minimal design changes, including a small Squier logo on the headstock where the "Original Contour Body" decal normally appeared, and a more cost-effective zinc tremolo block in place of the usual steel one.

These early Squier JV models were produced until late 1984 and are highly sought after among collectors today for their quality and relative scarcity. Soon after their introduction, a new and larger Squier logo appeared, accompanied by the now-familiar "by Fender" logo. 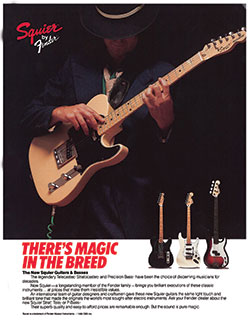 In late 1983, as it had in Europe and Japan, Fender decided to import Squier instruments into the United States in order to compete with the many copies flooding the domestic market. To make them stand out without competing directly with Fender's existing domestic models, these U.S.-bound Squier models were given '70s features and touted as the first instruments ever "officially authorized" to borrow from Fender's classic designs.

Using the slogan "There's Magic in the Breed," Fender re-launched the Squier name in the U.S. market with these instruments. 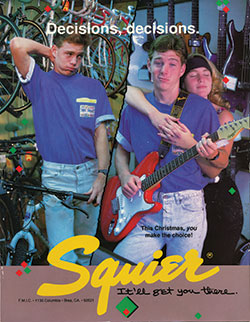 The Squier Standard Series, introduced in the mid-1980s, was based on the original vintage models, but with more up-to-date features (likely mirroring design evolution and standardization at big brother Fender). By 1989, the series had evolved to include the Squier II Stratocaster (which had a more modern-looking tremolo) several non-pickguard contemporary designs, and even the heavy metal HM Series, which featured pointed headstocks and flashy finishes. These contemporary and HM series instruments soon disappeared quietly, but the Standard Series itself continued throughout the early 1990s and evolved into a new generation of Squier models. 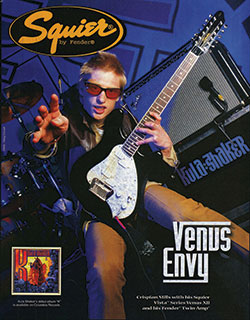 The Squier lineup was augmented in 1996 with Affinity and Pro Tone/Vista series guitars and basses. Entry-level Affinity Series instruments were straightforward, basic Stratocaster, Telecaster and Precision Bass guitars in black, red and white. Next came the existing Standard Series, and at the top of the line were the new Pro Tone models, fine instruments with special touches (aged plastic parts, shell pickguards, painted headcaps, etc.) that appealed to the growing number of Squier players who preferred to upgrade their instruments with after-market parts.

Higher-end options such as transparent finishes on ash bodies and gold hardware began to drive Squier prices up and elevate the brand perhaps a bit too close to Fender and Fender Japan during this brief era.

Non-traditional Squier Vista Series instruments were also introduced in this period. Some Vista models, such as the Super-Sonic, Venus and Venus XII, were innovative designs with no clear Fender predecessors; others combined Fender features from different models into all-new creations such as the Jagmaster, which remains a solid Squier performer to this day.

The Affinity Series paved the way for the subsequent great success of Squier instrument/amp/accessory packages, such as the Strat Pak and Bass Pak, that provided aspiring musicians with everything they need to enter the world of amplified music in a single all-in-one purchase (usually by mom or dad). Fender had previously experimented with "holiday bundles," but the Squier package concept proved wildly successful, putting a new generation of young musicians on a path to making music. 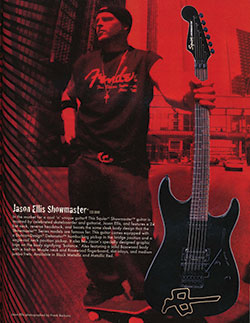 The dawn of the new millennium saw Squier dabbling once again in areas perhaps better left to others, with several products designed to appeal to and accommodate more aggressive playing styles. The Squier Showmaster Series, much like the HM Series of the 1980s, featured non-pickguard guitars with locking tremolos, multiple humbucking pickup configurations, black hardware and reverse headstock designs. Music tastes at the time often ran to lower-than-low sub tones fueled by 7-string models, and Squier produced a short-lived 7-string Showmaster guitar.

Throughout the early 2000s, Squier staples such as the Affinity and Standard series continued with few changes other than occasional color additions, although a new twin-pivot bridge with satin anodized saddles was added to the Standard Series (once again mirroring Fender in design evolution). 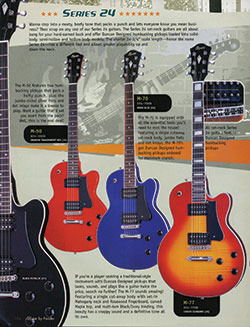 Squier celebrated its 20th anniversary in 2002 by launching its new Series 24 instruments (referring to their 24 3/4' scale length). Although the new series offered several instrument style options—single-cutaway beginner guitars, semi-hollow-body blues guitars and archtop jazz boxes—at an excellent value, these products ultimately did not resonate with the Fender audience, beginners or otherwise.

More successful that year was the follow-up to the best-selling guitar of the previous two years, which was Fender's Mexico-built Tom DeLonge Stratocaster model. Squier introduced its version of Blink 182 frontman Delonge's signature guitar, which featured a more familiar Fender approach with its '70s style Stratocaster design, plus a single Duncan Designed™ Detonator humbucking pickup and single volume knob. 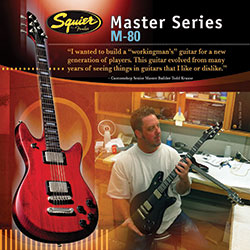 Squier produced a succession of successful launches from the early to mid-2000s, most of which kept the Fender theme. Limited edition Affinity series guitars included a Butterscotch Blonde Telecaster and Two-color Sunburst Stratocaster; new standard colors such as Metallic Red and Metallic Blue were also introduced. Figured-top Deluxe models and black-and-chrome Standard Series models were launched, along with two Telecaster Custom models that became part of the new Vintage Modified family.

Squier introduced the Master Series in 2005; five instruments with dual humbucking pickups intended for players of all styles, from blues to rock to metal to jazz. In a first for Squier, Fender Custom Shop master builders designed two Master Series models, the M-80 and the Esprit. The M-80 was a smaller non-traditional double-cutaway offered in a budget model and a higher-priced version with satin hardware and block fingerboard inlays. The Esprit borrowed its shape and name from a mid-80s Fender model used by players such as Robben Ford and studio ace Tommy Tedesco. 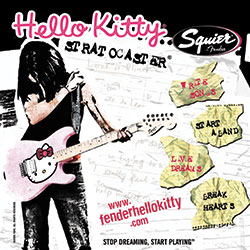 Artist associations have been an important part of Fender from the beginning, not only in terms of brand awareness, but also as part of product evolution. Squier has now entered that arena, too, with the three new Squier Artist Model basses that debuted in April 2007—one apiece from Green Day's Mike Dirnt, Anthrax's Frank Bello and Fall Out Boy's Pete Wentz. In the future, Squier will seek more artists who want to be part of the Fender family and be associated with products that give their young fans an affordable instrument of inspiration and expression.

Squier is Fender—sharing its product platforms, trademarks, standards and iconic designs. Squier is the launching pad for beginners, pointing intermediate and advancing guitarists toward their ultimate goal—owning a Fender! With those goals and others in mind, Squier will continue to offer products with features and prices that deliver truly excellent value, from beginners to hobbyists to working musicians alike.